We were relaxing on the lanai during Happy Hour, thinking it was just the two of us.      Little did I know that we had visitors, hundreds of them!       Our new palm by the lanai had a new addition that had not been there earlier in the day. 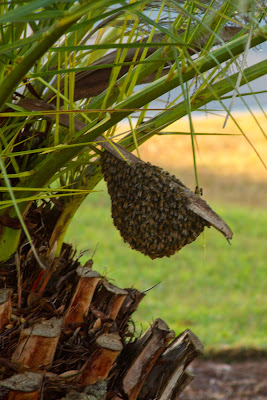 By sunrise this morning, the hive had increased in size.   (Yes, we were up very early as RJ had an early morning sports thing going on) 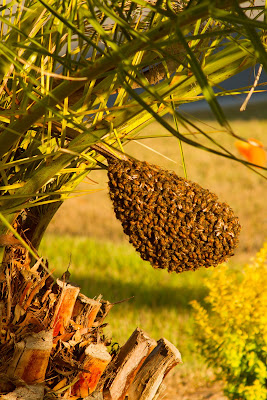 Fortunately, last night RJ googled for a friendly bee keeper.   We called Scott (who just happens to sell honey at the Farmer's Market we frequent).     Unfortunately, he wouldn't be able to come over, but referred us to Johnny who was thrilled to start a new hive.

He was equally thrilled that it was only 4 feet off the ground and easily accessible.     He just snipped off the dead branch and placed it in the box. 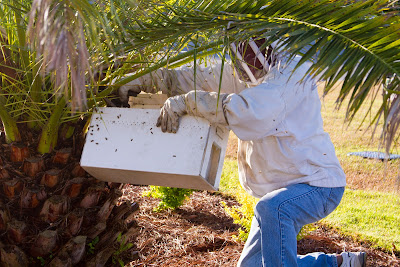 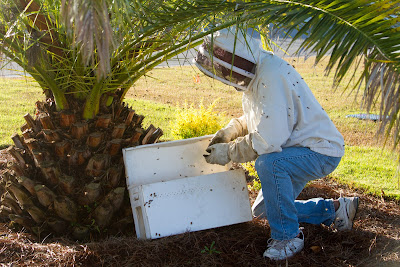 Although Johnny is not a "Villager" he lives nearby and has been here over 40 years.      He gave us lots of information about The Keys, where we plan to visit this summer.     He has spent a month or more there every year most of his adult life.     He's a diver, fisherman and also goes down for spiney lobster season.

He also talked about going to the Gulf coast with his kids and grandkids every September for scallop season.     I learned you find them in the grass areas in 3-6 feet of water.     Can you imagine how delicious they would taste! 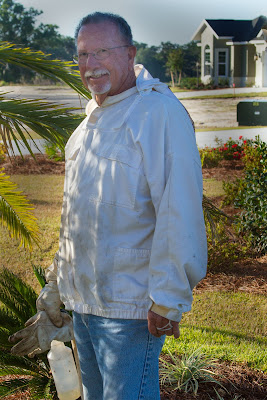 Time to close up and head home.     He has a box waiting for the bees with a honeycomb inside. 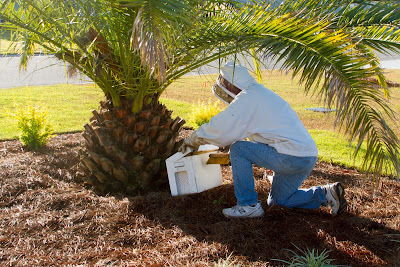 Johnny thanked us again for calling and gave us a bottle of his JB's Wildflower Honey as a parting gift.      It's a win-win-win situation.      I no longer have a swarm of bees outside my door, Johnny gets to start a new hive and the bees have a new home..........

Posted by Our Retirement Journey at 7:58 AM