Tarpon Springs is a historic Greek seaside community near Tampa.     It was settled in the late 19th century by Greek immigrants from the Dodecanese Islands.     They were attracted to the area by the opportunities to dive for natural sponges here. 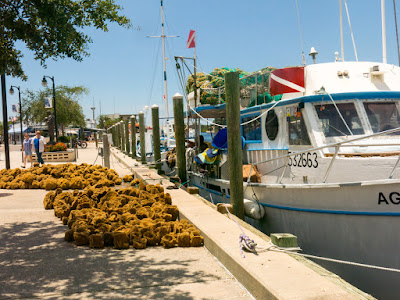 They had been harvesting sponges around the Greek islands for centuries and brought these skills with them.    They also brought their heavy diving suits.     These weighed about 177 pounds each and had a copper helmet with an air hose.    Obviously this was a hazardous operation.    At one time there were 1,550 divers who had settled in the area.

Today there are still a few divers harvesting the natural sponges.    This boat was sorting and unloading its sponges. 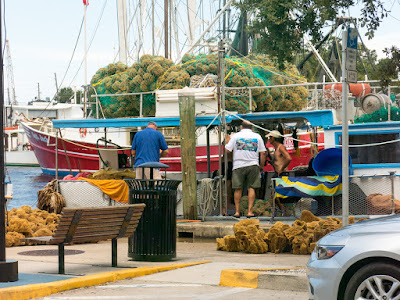 I don't have pictures of the five types of sponges gathered in this area, but each type has specific recommended uses.

The wool sponge is named after its soft resemblance to sheep's wool and is perfect for bathing.

The yellow sponge facilitates exfoliating while bathing.    I'll let you know if it works!

The silk sponge is a cosmetic sponge ideal for facial cleansing and makeup.

The basket/vase sponge is self descriptive.    They had them on display with air plants, but many are large enough to use as a decorative outer vase. 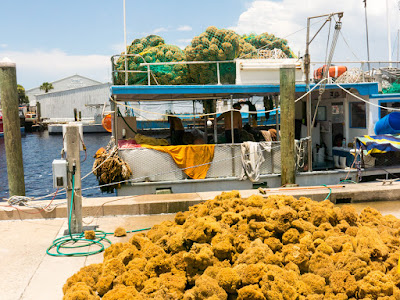 This third boat was also sorting and unloading their harvest. 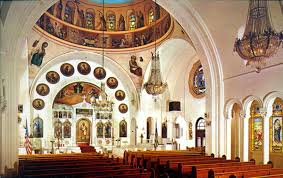 We were not able to get inside the St. Nicholas Greek Orthodox Cathedral because of services.    (I got this photo from google images)

It was built in 1941 as a replica of St. Sophia Church in Constantinople  (Istanbul) which is said to be one of the most beautiful churches in the world.    This replica has Byzantine architecture, 60 tons of Greek marble and a fine collection of religious artworks. 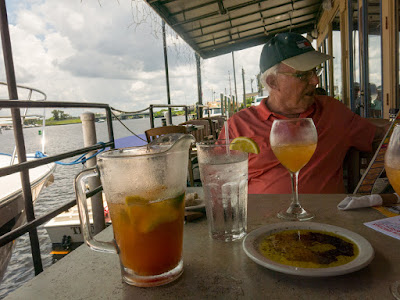 The mango sangrias were great.     Lunch hadn't arrived yet but we are enjoying our bread and olive oil.         RJ is so engrossed in the brochure he didn't even see the shapely, bikini clad woman who came out to sunbathe on the front of the boat moored right next to us!

Posted by Our Retirement Journey at 11:52 AM