Today we drove north from Tofte up to the Canadian border.     (We were so close to the border that I actually got a text from Sprint saying I was entered the Canadian Roaming Zone)

This rainbow was the first thing I saw as I rounded the corner to view the falls. 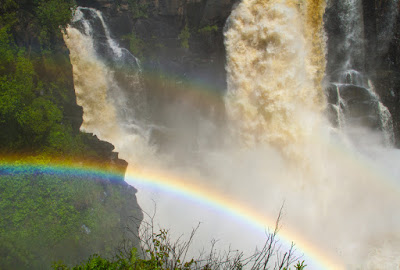 A few feet from the border crossing is Grand Portage State Park.     The Ojibwe Indians named the place because it was a 9-mile portage to transport items around these great falls and the surrounding rapids, cascades and huge boulders.

High Falls is 120 feet and when the river is running high, it drops 3,200 gallons per second over these falls.

There is a platform where you can see all three falls at one time. 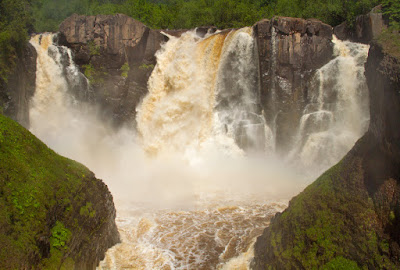 One final rainbow as we were leaving. 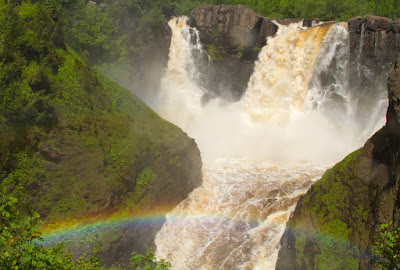 We also stopped at the Susie Islands overlook.      These 13 islands are important conservation sites in part because of their rare native plant communities.    Large varieties of moss and lichen, more usually seen in arctic and subarctic regions, have been spared the frequent forest fires and heavy human traffic.     A 1 to 3 foot thick blanket bog of sphagnum mosses has spread over the islands.

In this isolation, a community of plants continues to thrive.     Species that disappeared from the rest of Minnesota after the glaciers receded northward still survive here. 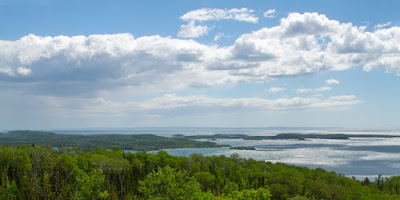 Back at the resort, we were joined by a couple birds and the beautiful sound of the waves hitting rocks. 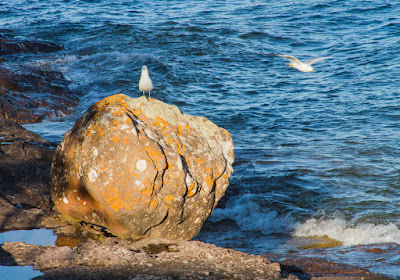 Posted by Our Retirement Journey at 7:23 AM